Translating the same language, another variant

Thank you very much.

Hello Andreia and thanks a lot for your message and for being part of our community. Translators should always stick to the variant specified in the project information, so if a project is for Brazilian Portuguese, it means that it needs to be translated into that variant. Someone else asked a very similar question here and many other people from other languages gave input, if you are curious to read it, you can find it here:

Revisions made by non-native speakers - yay or nay? Kató FAQs

Hi everyone, I’m opening this topic to share an opinion / concern with you. We all know that one same language can be spoken in different countries, thus having great differences. And if it’s true that most of the times it doesn’t compromise you understanding the message, it is also true that it´s usually fairly easy for you to recognize whether it is written by a native speaker or not (specially when it’s not). “Where is she going with this?”, you may ask. Should we narrow our revision task…


We often have high demand of Portuguese-Portugal translation requests, so I am sure you will find plenty of texts to translate. I’d also recommend you consider becoming a verified translator, which will give you access to many more tasks!

How to become a Kató Verified Translator? Kató FAQs

Thank you very much for your help, Ambra! I appreciate it. I will check out the topics you suggested. Thanks again

A good question.
I was wondering the same as a pt_BR translator.
When I’ve received task stream emails and/or look for tasks from en_GB or en_UK into pt_BR or pt_PT I never saw any restriction about these two kinds of Portuguese, mainly because and after the New Orthographic Agreement., signed in Lisboa for Angola, Brasil, Cabo Verde, Guiné-Bissau, Moçambique, Portugal e São Tomé e Príncipe.

Until today I’ve never had any issue regarding pt_PT translation as a target language.

If there’s some kind of restriction about that matter, I’d like to suggest that these variations can’t be reach by email these translators and blocked as available task like any other language that doesn’t appear in their profile. 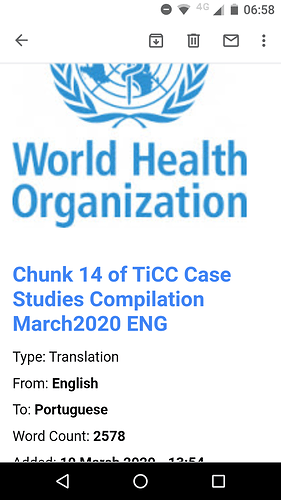 Thank you both for your input! According to the feedback we have received from volunteer translators and nonprofit organizations we work with, the two variants of Portuguese have some substantial differences, and considering that at Translators without Borders we believe that all languages and language variants matter, we want to make sure that the translations we delivered can be fully understood, with no room for misunderstanding, by the speakers of the country we are targeting. We value and respect the country differences and for this reason, we prefer to be very mindful of the variant also to maximize the effect of the messages we translate.

Hi @ambra,
I understand all of your explanation, even speaking with European Portuguese persons and both understanding each other completely because the main difference is the accent, when the subject is the writing something can be changed.
Today I addressed two files in pt_PT but were the last ones.
Therefore only if pt_BR available.
I’ll follow the rules now that I awareness about them.
Once more thanks and have a nice day.
My best,

Thank you so much, Claudia! We really appreciate your commitment and desire to support, you are a star