Hi
I’ve been around for a few months now and am getting used to the very basics of translating within Kato TM. I am starting to notice additional things and want to do more within the programme.

I have sentences I’ve typed that have been highlighted - one in green and one in purple. There is nothing wrong with them. They’ve not been flagged as errors under the exclamation mark. Could someone explain what these mean please?

Also I notice that the spell checker is always in US English - is that Kato TM or my dictionary settings? I often work with tasks requiring EN (GB) (and am indeed British so knowing how to reset the dictionary would be handy). Does anyone know how to change it? (My computer is currently set to English UK - for now)

Is there a next level course available in the use of Kato TM? It would be really handy, I like being able to manipulate a computer programmer to get it to do whatever I want it to do.

The green highlighting indicates that there is punctuation mark error or multiple spaces between two words. They don’t always appear as an error for the system. Maybe just the multiple spaces and the quotation marks (in case they are different form the ones in the source text, well this is according to the case in my language pairs).

The purple highlighting indicates that the same word is repeated twice, and you are right it doesn’t seem to be as an error for the system.

I am not really sure about the settings for the spell checker, but I think it should be according to the target language in Kato TM, and it has nothing to do with your computer settings. Maybe Ambra and Manuel will give the right answer once they read this.

Have a nice day Hazel.

The spell checker is always in US English for me too - and my target text are in Portuguese, so basically Kató TM is always convinced my work has severe spelling issues.

As I never found any way to change it, I always assumed the spell checker was in US English for everyone by default.

Is your spell checker in Arabic, @SalwaAlrifai?

(Thank you in advance

Regarding Kató TM courses, I’m not aware of any. But @Juan_Martin once shared an useful resource about how to understand, handle and fix tag errors and tag issues. Being the most complicated thing about Kató TM, I thought you might want to have a look at it.

Have a great Sunday!

All the best,
Andreia

Hope you’re doing well. Many times some segments may be highlighted in green due to unpaired quotation marks or question marks, for example. They may be highlighted in purple, for instance, because of an unpaired use of capital letters. In the case of English and Spanish, which is my strongest language pair, this is inevitable as these languages do not share the same punctuation or capitalisation rules. I’d say that you shouldn’t worry about them. You can just click on “ignore.” Now, as to the spell checker, here’s a link to help you out: https://site.matecat.com/faq/spell-checker/

Hope this helps!
And have a nice Sunday!

Hi Andreia and everyone!

Yes, exactly, the spell checker is in Arabic. It accepts the differences in punctuation marks. For example, in Arabic, the comma looks like this (،), and the question mark should be in the other direction (؟).

It does not detect the wrong spelling, but detects the foreign characters. This is why I thought that it depends on the target language.

You just reminded me of something. I did accept few tasks into French, but the spell checker was in English. All the words were detected as wrong spelled,

and if there were any differences in the punctuation marks, they seem to be as errors for the system.

I tried to follow the instructions in the resource that Juan just provided, but it does not seem to be working with me.

However, it looks like that the spell checker in Kato TM actually depends on the target language, but not all languages are available (I am only sure about English, Arabic, Russian and probably Chinese).

Have a nice week ahead, colleagues!

Thank you so much everyone for your replies. It is so interesting to see how these different issues affect is in different languages too! I was not expecting that within this answer

@andfraz and @SalwaAlrifai to hear about your dictionary issues interests me. It never occurred to me how complicated setting up a multilingual platform could be, yet also how mindful we need to be as translators that the English dictionary is a guide, as things stand at present, and a pretty coloured highlighter in other European languages by the sounds of it.

I feel reassured about the highlighted sentences, but when I look back, I still can’t see anything wrong with them. So as you say, Ill just ignore them.
@Juan_Martin it’s reassuring to hear that working in the same language pair you are plagued by these same problems. Thank you for the link, I will sort out chrome when Im back on my computer tomorrow.

Have a great week everyone
Dont work too hard

Thank you all @Avellana @andfraz @SalwaAlrifai and @Juan_Martin for a very fruitful exchange. It’s heartwarming to see fellow translators collaborate so professionally and selflessly

These are all great suggestions, I’m just tagging @Manuel in case he has any more guidance on this.
Keep up the good work

Hope you are doing great!

Did you manage to change the spell checker settings? It looks for me that it is easier than we actually thought.

When you open Kato TM, click on the right button of the mouse. You will see multiple choices including “Spell Check”, and you can choose your target language. That is it.

In case you didn’t find your target language, you can easily choose “Language Settings” 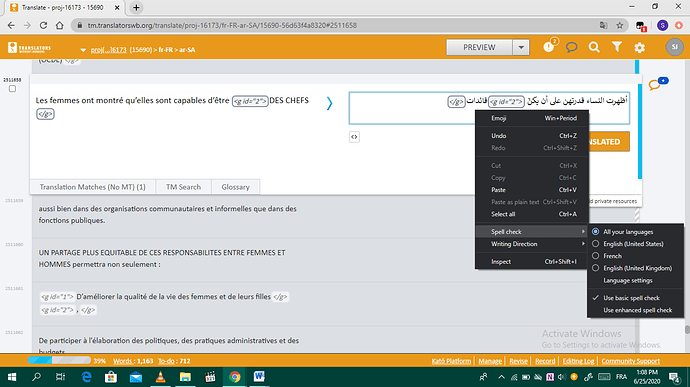 Good morning @SalwaAlrifai I hope you are well.

I went through my google settings and checked everything
Remarkably after I did that, I had a scout around Kato TM and found exactly what you have just posted above.

I was not clever enough to do a screen shot though. Thank you for doing that.

It has been on my mind since we had the discussion. It’s brilliant because if I’m translating into English US I can change the dictionary and then put it back when it’s done!.

If I add to or modify the English UK dictionary on a document I’m working on - would it also amend the EN (UK) dictionary of everyone else on Kato?

If so we need to be mindful that we are in the right dictionary for the right country/language variant - not just english, spanish, portugues, arabic, french, …etc etc etc
to make sure that this resource works really well for everyone and to increase accuracy in our translations.

Well, you can ask questions as many as you want. It is always a pleasure for me ( and I am sure that also it is for the others) to read and answer them.

I really did not think of that.

But I believe that changing the spell checker settings should only affect the project you are working on without affecting the general settings in kato TM. Having said that, if you are working in a project divided into chunks, there might be a chance that it changes the spell checking for all chunks, but you know, it is for the better for the other translators.

Have a nice day Hazel!